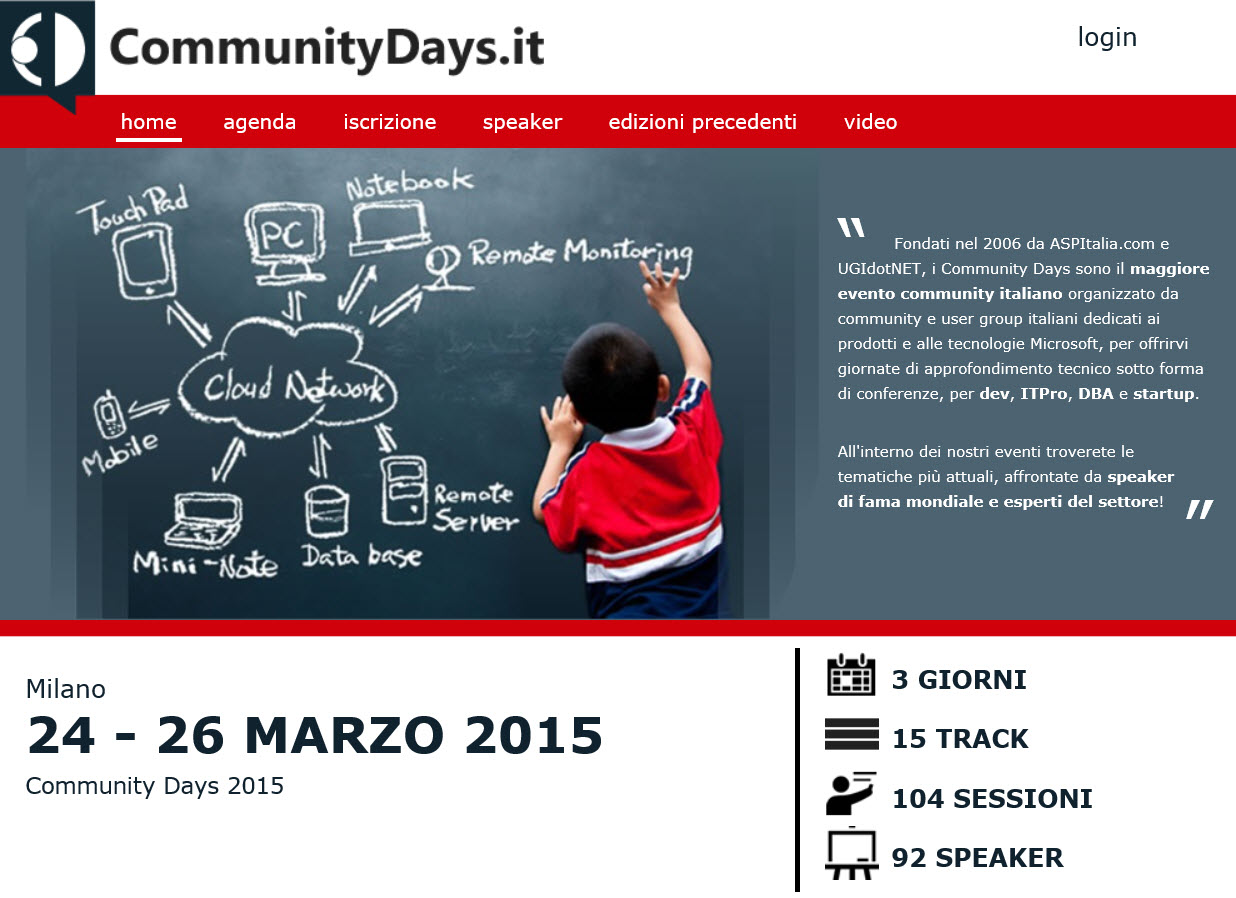 The Community Days 2015 have taken place in March from 24th to 26th 2015.
This meeting, which took place at the Microsoft Innovation Campus in Peschiera Borromeo (near Linate-Milan Airport), is the biggest event for developers and It-pro in Microsoft technologies. The numbers are impressive: 3 session days, 15 tracks to follow, 104 sessions and 92 speakers.
Community support was very important in the collaboration for the preparation of the event and for the engagement during the three days event itself. All the community members are volunteers and this means that neither the speakers nor the community members are paid.

As usual, the event is organized by Aspitalia.com and UGIdotNET, in partnership with Microsoft and performed by iCubed.
This year the most important news has been the Internet of Things (IoT): a track with six sessions and a round-table.

Gianni Rosa Gallina and I have presented the session: IOT04 – Internet Of Things: dalla teoria alla pratica (Internet of Things: from Theory to Practice)
We started presenting a short history of the IoT referring to some forecast in the past years (from 2006 to 2011) about IoT and what is nowadays situation.
After this we presented the Windows Embedded family that has an important role in the Microsoft IoT scenario. At the end we presented some demos on real IoT solutions at device and cloud level.

This is the agenda of the session and our slides are available here communitydays2015:

At the session there were more than 40 attendees that seemed interested and satisfied.

The whole event has been interesting both when we presented our session and when we followed other sessions. This has been another opportunity to meet Microsoft staff, the other speakers and the community members and has allowed us to improve our professional network.

I take this chance to thank:

Because our big interest in following, studying and applying everything is connected with the “Internet of things” argument, here is a list of the events (recent and future) in which we were or we will be involved:

Stay tuned on this blog or on the BEPS web-site (www.bepseng.it) for more information on these events.